For "Where There's Smoke" I used a clay on glass technique, where the images of fire where "sculpted" into the clay, down to the glass, revealing the light below. I used black modeling clay, which was completely opaque. This was back lit by a photo flood light. There was a sheet of diffusion filter about six inches below the clay on glass layer. It made the light very bright but glowing more than glaring. Then I placed a sheet of glass painted with fire colors over the clay. I used Pebeo Vitrea 160 paint, it's a glossy transparent paint for glass. It's a kind of enamel paint and smells like nail polish, only ten times stronger. I let a heavy coat of red set up a little and then painted into it with a stiff brush. It made flame like striations in the old paint while filling in the lines with yellow and orange. This sheet of glass was positioned in a random way over each sequential frame "drawing". The glass layer was not flush with the clay. As the clay layer was uneven and changed from frame to frame, the flame glass was always a little higher then the clay. This gave the animated flames a lot of extra glow, and because it changed every frame, it also gave it a nice flicker.
These images show the clay on the glass with the back light on. The second image shows the painted glass layer, and the third image shows the combined elements. 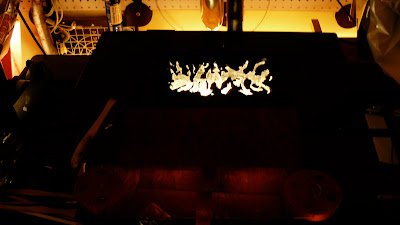 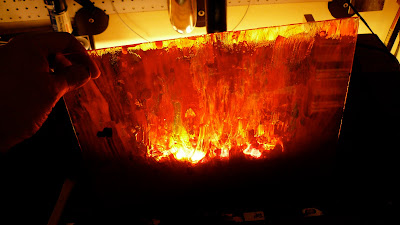 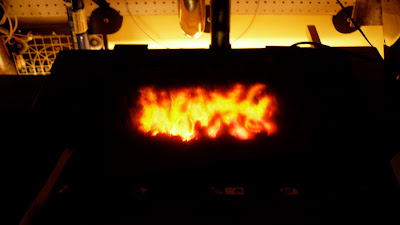 Labels: How to animate fire 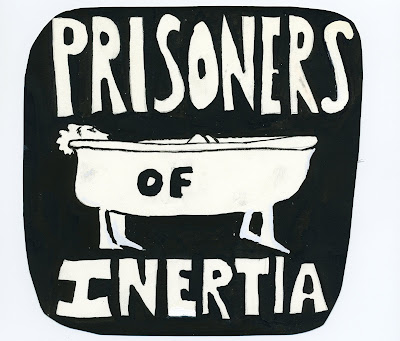 Francis Thompson made this jewel of a film in 1957. He was a painter and art teacher before discovering filmmaking. Inspired by cubism and futurism, this film is a uniquely cinematic celebration of the spectacle of New York City. It is a city symphony unlike any other as it is simultaneously abstract and figurative. Every shot is altered by anamorphic mirrors or prisms that he assembled and manipulated himself. He  turns the city into an optical ballet. He worked alone, almost in secret. He described his production process for a screening of the film on Reel New York. “...it was a magic, secret process of bending, twisting, and turning inside out. It was a self funded project that involved my roaming about New York City with a camera over my shoulder”.

He went on to make many more films including the Oscar winning “To Be Alive”, a three screen celebration of life made for the 1964 World’s Fair. He died in 2003 at the age of 95, after returning to painting in his later years in his East 51st Street apartment.

These photographs were taken recently with a Pentax Optio 750z using the built in 3-d feature.  And I have to say, this is one of the most wonderful cameras I've ever used. It can make "free-viewing" stereo photographs, cross you eyes style. In the side by side images below, left and right eye views are reversed so that crossing your eyes will reverse them back.  With crossed eyes, you see the image double, overlapping in the center. The center, merged image when focused on will appear in 3-d. The images are taken one at a time and  converted into a single jpeg by the camera. It's called the "cha-cha" method, because of the little step you make to the side for the second picture. The advantage of this method is that you can control the distance between the two exposures as well as the angle. This allows you to increase the depth of the image by increasing the distance between the two exposures - you have the stereo effect of seeing as if your eyes where anything from a few feet to miles apart. The disadvantage of this method is that anything that moves between the exposures will not merge when viewed. In each of the photographs I took below, there is a kind of subtle stereoscopic reward at the moment the 3d is achieved. 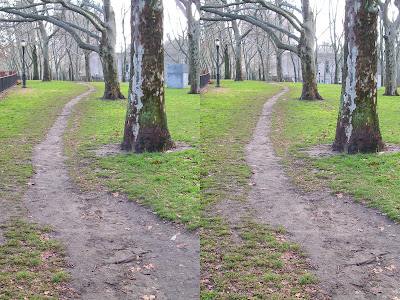 Cadman Plaza Park in Brooklyn. A classic stereo composition with a path leading the eye to the horizon. 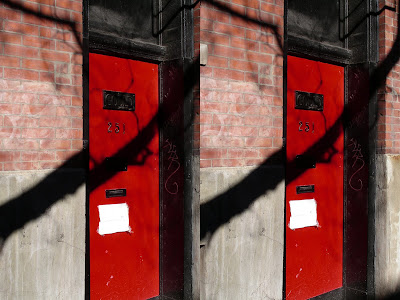 A very red door in Chelsea. 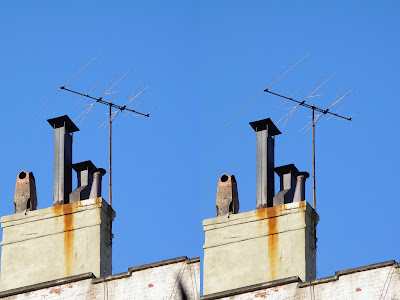 The soon to be extinct television antenna spotted in Brooklyn Heights. 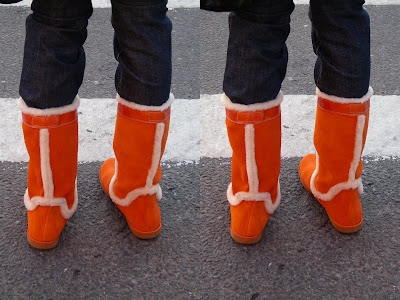 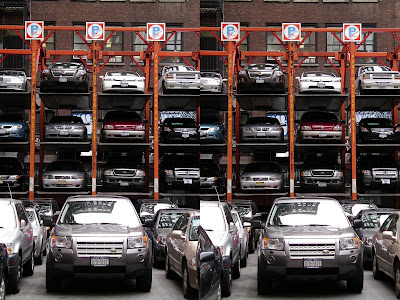 Parking lot in mid-town Manhattan - focus on the car in the foreground. 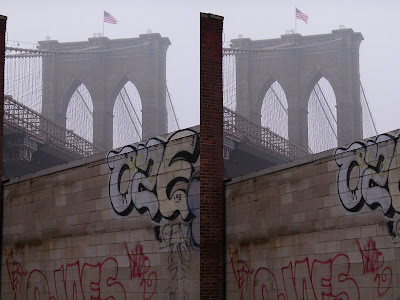 Brooklyn Bridge from Dumbo on a foggy winter morning. 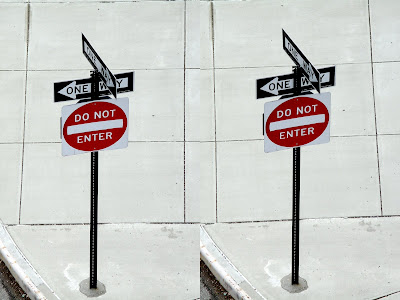 A very telephoto stereo image. The depth of field compression is rather surreal.
Posted by Jeff Scher at 11:15 AM 1 comment: 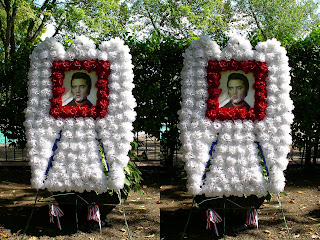 To View these images in stereo you must cross your eyes. Don't worry, it's a natural thing your eyes do all day as you look at anything close up. When your eyes are crossed you should see three images. The one in the center should be the right and left images merged. They should be in stereo or 3-d. The effect is dramatic when it happens, but you may need  to work a little to get it. Sometimes you may need to rotate your head a little to align the images.
Posted by Jeff Scher at 12:00 PM 1 comment:

Labels: Free Viewing Stereo photo from Graceland
Posted by Jeff Scher at 11:57 AM No comments: 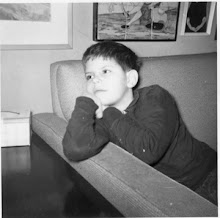